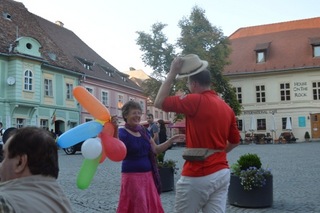 The road to our last stop-over before Sighisoara took us through all that we loved in Transylvania, riding on tracks through the fields and woodland, past meadows of wild flowers, deer tracks, terra cotta villages nestling between the hills, and sheep and cows ringing their bells, and bees buzzing lazily in last warm rays of the summer sunshine.

We were riding towards the Siebenburgen area, which had until recently been the home of Romania's Saxons who moved there at the request of King Geza the Second in the twelfth century to provide a buttress against the onslaughts of the Ottomans. Here the Saxons lived, maintaining their own distinct culture and way of life until the 1989 revolution in Romania. After the revolution, Saxons flooded back to Germany, enticed by promises of a better life, leaving those who remained as caretakers of almost a thousand years of history to become living museum pieces in their own lifetimes. Some have returned, disappointed with what they found, but time doesn't stand still.

Having dismounted from our trusty steeds, all heaved a huge sigh of relief, tinged with sadness, and we thanked God and our horses that none of us had fallen off or had to suffer anything more than the odd blister. Ibuprofen, Apricot Brandy and Asprin had dealt with all aches and pains.

Liz was still wondering about shipping Lipizzaners to West Malling, and Ghilly was ever thankful that her fiery Arab mare "Scheherezade" (or sometimes after a few Palenkas, "Schevardnadze") had tempered her speed to carry her safely through woods and water, Robert wanted to charge his phone and polish his boots and Natalie was keen to explore Prod and its library.

Our host for the night was Mihnea Virgolice ("call me Mick Jagger") who runs the cross country farm, together with an elegant retinue of energetic stable girls and a prize winning Russian Borzoi. Mihnea hosts all manner of riding events, including the Transylvania Horse Show (http://cross-country.ro). Mihhea also knew Greg Helm, who was my guide and friend on my first ride in Transylvania.

We felt extremely pampered in rooms with fluffy white towels, fresh bed linen and lashings of hot water. Some of us started to wonder whether the lady riders would ever emerge from their steamy "toilette", although they did eventually emerge like fragrant clouds, having miraculously smuggled Chanel No 5 and "Because I'm worth it" kits amongst their dirty riding boots and jodphurs.

We were joined for dinner by my parents (David and Jayne), who, having spent the last few days enjoying the remote guesthouses of the Prince of Wales and Count Kalnoky, travelling by horse and cart, inhaling health-giving mountain gasses and living in singular solitude, were keen for fresh company. They had acquired a deep knowledge of the culture of the Szekely people. Maybe it was my imagination, but I think my father had started to pick up a Romanian accent! He'd certainly gained a solid appreciation of Romanian viticulture and Palenka!

Mum and Dad kindly brought a Welsh flag, a "Welcome Home, Michael" banner and introduced Mihnea and his team to such unforgettable Welsh hymns and arias as "Mae Hen Wlad Fy Nhadau" and "Sospan Fach". No mention of this night would be complete without mentioning Mihnea's incredible cook, who produced steaming bowls of meat and vegetables laced with chilli and garlic and an award-winning creamed Aubergine surprise. As Mihnea said, "If you want the recipe, you'd better be quick, she's 77".

The following day, we arrived at Sighisoara, described in the Lonely Planet, as "so beautiful, it should be arrested!". Lonely Planet was not wrong! The architecture is just what one would expect of a 12th century Saxon citadel. Gothic Dracula wrapped in Austria Hungary - all protected by UNESCO. Vlad "the Impaler" was born here in 1431. He is now better known as Dracula and widely regarded as a hero for keeping the Ottomans at bay.

Casu cu Cerb (bastion of the Romanian slow food movement) provided us with a delicious dinner of Romanian fare and wonderful Romanian wines and ... more Palenka. We were interviewed on national TV - anntenae 1, which was very pleased with what we were doing to raise funds for the Romanian Paralympic Association, which has the smallest budget in Europe.

During the dinner, we were able to thank our wonderful guides and organisers in Romania, Radu, Catalin, Simi, Dan (and the team at DHL (Dan Kearvell) who had helped with logistics and provided vehicles), Yulia from La Roche Posay, which provided amazing sun-cream that prevented riders and horses from burning in the sun, Jo Richards for running GCHQ in Cardiff. We also toasted the teams at the British Paralympic Association, the Romanian Paralympic Association, Maria's Children, the Heart of Kent Hospice and St Andrew's Moscow for the wonderful work they do.

We toasted Robert (at 72, the oldest and longest riding rider other than me - a wonderful example of active septegenarianism riding intrepidly through Ukraine and Romania), my cousins Liz and Ghilly, and Natalie, who provided grace and poetry (wet wipes, antibacterial hand cleanser and good humour) throughout the ride. We also thanked the hundreds of people/friends who had been so kind to us during the ride, providing shelter for the horses and for us, fresh milk, eggs, coffee, smiles, encouragement and Palenka, Vodka, Horilka. We thanked the friends and riders who have joined us on the ride - our Russian friends (the "Teterentsi", who came to cook hot borsch and bring liquid refreshment when the weather was cool at the end of June). Jeff Browne, Ira, Louis and Beyonce, who came to visit bringing chilled champagne, fois gras and other essentials in the intense heat of the Russian summer, Rosie Hawes for providing shelter and good cheer! We also thanked beregpr.com, Coast magazine and Anna Jackson-Stevens for providing PR for the ride. Stephen Konigsberg and Brian Bellerose for being great sports and joining the ride. kelly Harrison and The Webfactore for IT mastery. And all the riding support groups (Eugene Matusov at bezpovoda.ru, Alena Maroz in Belarus, Andriy and Slavik in Ukraine, Mihnea for the warm welcome at the end of the ride). We toasted Mother Valentina at Spaso-Borodinsky Monastery for succour and silver crosses, and God for keeping us safe in such varied landscapes over three months.

We toasted Friday the Dog who provided much amusement, and protection before
becoming too friendly with a few male dogs and having to take it easy in a Russian village to prepare for motherhood.

Our toasts finished with an enormous thank you to all who have supported the ride by sponsoring the British Paralympic Association, the Romanian Paralympic Association, St Andrew's Moscow, the Heart of Kent Hospice and Russian Orphan charity, Maria's Children, supported by Stephen Konigsberg. We'll be having parties in Moscow, London and Cardiff to thank all supporters and to share photos and stories from the ride. Any last donations can be made as follows:

mission accomplished - the start of the celebrations in Sighisoara.jpg