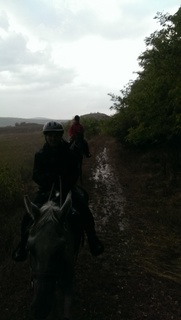 After Stephen and Brian had set off on the night train to Bucharest to travel back to New York and Moscow, respectively, we prepared for the arrival of new flesh n' blood for our entry into Transylvania.

For the last week on the road, our new guests were my cousins Ghislaine and Liz, and a friend from the UK, Natalie. How would the first female guests during this ride manage with the long rides, the camping, the Transylvanian storms?

Our female guests were very pleased after arrival at Cluj Napoca to be welcomed to a Lippizaner stud farm, home to the lesser known black Lipizzaners, which left Liz wondering whether she might introduce this breed to West Malling.

After a night at the guesthouse of our new guide for the week, Simi Christmas, we set off for our first day of 35km riding through the gently undulating countryside of this part of Transylvania. Much much softer than Bucovina, small-scale fields of oats,maize and tobacco replaced the Alpine pastures of last week. Tall beeches were replaced with shorter copses of oak and hornbeam, leaving one nostalgic for the shade, but luckily, we were blessed with cooling breezes and frequently came across flocks of sheep, goats and cows, all protected by ferocious dogs and lonely shepherds.

As the first full day in the saddle for the ladies, we took the ride at a gentle pace until we spotted our camp for the night (indicated by our bright yellow DHL van) at which point, Ghilly's Arab mare took off like a bird! Natalie and I joined in the chase, thankfully finding that Ghilly managed to turn Scheherezade and slow her down around a copse, rather than galloping all the way to Sighisoara.

After a night under canvas, we set off in the warm morning sun, expecting to be looking for shade all day. How wrong we were. Transylvania exceed its spooky reputation by providing dramatic thunder and lightening, which cracked overhead, leaving us thankful that the horses were calm in such circumstances. Mountain paths turned to orange muddy rivers and the graveyards on the surrounding bluffs provided a dramatic backdrop. Regardless of waterproofs, the warm raindrops soaked us all through to the skin.

Our ever resourceful Simi managed to find a hill farm at which Maria, the lady of the house and mother of six, provided us with freshly baked warm bread filled with melted cheese, the sweetest tomatoes, and some warming glasses of Tuika "Tsuika" to chase away any blues.

By the time, we descended into a low valley for our final night camping, the storm seemed a long way away, but had left us with a clear warning that the weather can blow up and change dramatically at any time.

Our next stop was at a new establishment built in Hungarian Gothic style thanks to EU grants in a village predominantly populated by Hungarians called Mezomadrasi. Our host for the dinner was the head of the Hungarian Catholic Church, Father Szabo. Dinner was in the monumental oak veranda of his manse and an old retainer with gold and silver teeth, and white hair smoothed under her black headscarf served fragrant chorba and spicy ghoulash, which we washed down with a moderate amount of plum brandy.

The Hungarian community works hard to maintain its traditions and for our evening's entertainment, we were treated to the rehearsal of dances, accompanied by high pitched violins. The children of the village whirled around like so many carousels on the stage of the schoolhouse, stamping their feet and slapping their legs with great gusto.

After more plum brandy, we retired to our Gothic retreat under the brightest stars and feel asleep to a now strangely familiar and sleep inducing barking of dogs, clucking of hens and clip clop of horses hooves as night owls returned home to roost from the village pub.

Dinner at the Priest's house.jpg