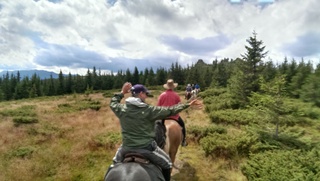 And so the crossing from Ukraine to Romania took us from North to South Bucovina, which is the most northerly part of Romania's Moldova, not to be confused with the independent Moldova. Confused? It is easily done. Why? Ask Stalin.

Bucovina means land of the beech woods and South Bucovina certainly lived up to its name as we rode through the gentle foothills of the Romanian Carpathians. Enormous beech trees provide dappled shade from the mid-August sun.

While waiting for two new guests to join, Robert and I explored the Putna monastery, resting place of Stefan cel Mare (Stephen the Great), one of Romania's greatest heroes, having won almost every one of over 30 battles and named by Pope Sixtus IV as the "Athlete of Christ". Having been destroyed in various battles and neglected during the time of Communism, Putna monastery is now undergoing a revival and resonated with the chants of Romania's Orthodox prayers and the sweet smell of cooking apples, sweetcorn and barley soup mixed with incense and roses.

After a night in a local "pensione", which provided a hearty Romanian dinner of Mamaliga, forest mushrooms, five different types of smoked pork, and large quantities of sour cherry schnapps, our new team members arrived. Stephen Konigsberg and Brian Bellerose, friends from Moscow who had flown in from Moscow and New York, respectively. Stephen wanted to discover the land of his great grandfather Jacob, who had run away from his "Shtetel" at the age of 15 to take a boat to New York and become a tailor.

We were also joined by three members of the Berejovshi family (Daniil, Dmitri and Mihai) who are to endurance riding what the Von Traps were to singing. Their mounts were one pure bred Arabian horse and two Arab Shagya's. When not being ridden, all the Arab/Shagya horses glided around together, keeping separate from the other horses.

Stephen secured Scheherezade, a grey pure bred Arab and as we lined up for the morning's press conference. trotted up and down the line of our horses like Mel Gibson at the start of the Braveheart battle scene. Brian was riding Blondu, an enormous Romanian draught horse weighing over 700kg. I had a very tall Romanian sports horse, called Lord, and Robert had one called Barcelona. Stephen continued the Braveheart theme during the day, by riding up and down the line of horses, chatting to all and learning new words in Romanian (in exchange for New York slang) from the younger members of the Berejovshi family. Luckily, the only foes one the road were the odd tractor, truck, blisters and aches and pains.

As the valleys narrowed and the hills were replaced by the fully-fledged volcanic mountains of the Romanian Carpathians, summer heat became cooler, beech was replaced by pine and the pace became slower as the tracks became full of volcanic rock.

Radu and Cataleen had managed in the middle of this wilderness to find a comfortable "pensione" for the night, and Radu's girfriend's grandmother had provided warming bottles of plum and blueberry Palenka, which looked like liquid amethysts. After a few glasses, Radu became "Ragu" and Cataleen became Katelin.

The following morning, we awoke to thick mountain mist, which burnt off quickly as we saddled the horses and set off for the mountain pastures and the Twelve Apostles in the Caliman National Park wondering whether we'd see the bears, wolves and lynx that live there.

Daniil Berejovschi at the Twelve Apostles in the Caliman National Park.jpg