Moonshine in the mountains 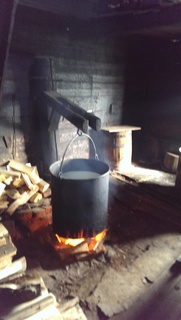 Being somewhat ahead of schedule, we decided to spend a few days high in the mountains with Slavik's extended family. Maria, Ivan, Vasily and Vanya decamp to the high mountain pastures in May and remain there until September with about 80 cows.

Their daily routine is a hard one of early morning milking, evening milking and in between producing salty and bitter Brinza cheese. If the weather in the valleys is hot and humid, high up in the mountains, you feel very exposed to the elements. It is cooler up here and the skies crackle and rumble with thunder, lightening. Thick fog descends rapidly and is burnt away equally rapidly by the fierce sun. Nights are cold. Washing is in cold mountains streams and there is a very strong feeling that you are sharing this environment with the deer, bears and (luckily for us) timid wolves that inhabit the surrounding woodland and although you sometimes catch a fleeting glance of them, they are probably watching you all the time.

The mountains are full of blueberries, bilberries and the woods are full of such a variety of mushrooms that Robert, Slavik, Andriy and I collected several bagfuls in an hour. Luckily, Slavik was on hand to throw away the toadstools I had proudly collected before Maria served the best of the mushrooms in freshly skimmed cream and friend onion on a steaming pot of Mamaliga (Ukrainian Polenta cooked in cream). Far from town, we tuck into steaming plates of fresh yeast pancakes, painted with melted honey served with the bluest and blackest of blueberries mixed cold with sugar and the freshest of sour cream, "vareniki" stuffed with meat and served in fresh melted butter. All good food for the mountains rides, such as the ride to a far off watch-tower perched among swirling winds and constructed long ago by the Austo-Hungarians to keep an eye on their Eastern borders.

Maria makes cheese in dairy at the back of the hut as if conducting a Pagan ritual. She lights the carefully arranged fire with one match as Ivan and Vasily pour pails of fresh milk into Lime wood barrels. More milk is poured into a large black cauldron and while the milk is heating, Maria produces a large glass jar full of salted calves stomachs from under a bench. This contains the magic elixir to turn base milk into golden cheese. The air fills with acrid smoke and as we sit on a low bench to avoid the worst of the smoke, Maria levers a large cauldron over the fire to heat the milk and stirs with a large wooden spoon. More steam as the hot milk is mixed with the still warm milk in the wooden barrels.

The curds are left to drip in the warm, milky, smoky dairy for a few days before being delivered down to the town to be sold by Nadia, Slavik's grandmother in the local market. Nothing is wasted and the whey is sluiced along wooden halfpipes to ever plumper pigs that squeal with delight and then fight as to who gets to drink most of this warm buttery liquid.

The routine continues until the first snows of September, when the family decamp to the relative hustle and bustle of a cottage with no running water or road, 5 km outside Verkhovyna.

When the wind abates, the stillness and silence of the mountains is almost alarming at times, and yet the days fly by with reading, chatting, singing (I must learn some more songs) and no night (or even morning) in these mountains would be complete without a shot of powerful moonshine, flavoured with roots, moss and crocus stamens dug up and plucked from the hills by Slavik. These fiery brews warm one to the core and put a spring in the step of cool morning rides and fuel nights of jokes and songs before returning to the darkness to find that all elusive tent...

Carpathian Cottage in the Hills.jpg