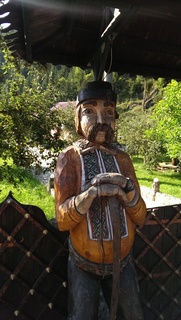 For the past few days, we have been riding higher and higher into the Ukrainian Carpathians as we make our way towards the Romanian border. This journey has brought us higher and higher into pine-scented wooded mountain valleys where the imprint of the Soviet Union and modern technology is less and less detectable.

Slavik, our Hutsul guide, has been extremely happy to be returning to Hutsulschina, the land of the Hutsuls. This is a land of wooden huts, sheep and cattle farming where locals where traditional dress made of wool and cotton shirts with hand-embroidered collars. The blue green alpine rivers rush over pebbles are full of trout and the mountain air is warm and fresh.

The Hutsuls, who only number about 2,000 have lived in the Ukrainian and Romanian Carpathains for thousands of years. Once fiercely Pagan, the Hutsuls are now pious Christians and yesterday (Sunday) the churches were full of locals in their Sunday best. Men and women sit separately. As as the women rushed in to be on time, their headscarves flapping, the men were more relaxed chatting outside over cigarettes. Yesterday the valleys were thronging with hymns. Pagan beliefs live on and naughty children are warned that the "Babai", a kind of Hutsul Yeti will come and get them in the night if they don't behave.

The Hutsuls spend their lives herding sheep and cows, making "Brynza" cheese, and collecting berries and wild mushrooms, which the locals sell at the side of the road.

Hutsul music is full of haunting drum beats, high reedy pipes and throaty songs. It sounds a bit like Yiddish music. The Hutsuls have their own dialect, but luckily for us, some of them speak some Russian or Ukrainian.

Locals are very friendly and last night we camped in the orchard of a friend of Slavik who kindly brought us fresh milk and home-brewed moonshine (this is a recurring theme). In the morning an old lady walked past the orchard with a pretty goat and offered to deliver it to as meat ready for kebabs this afternoon. We commented that it was quite a pretty goat to be chopping up, to which the lady replied that she was only selling it as it was old. We decided to skip the goat and let it live on!

From tomorrow, we'll be up high in the mountain pastures, watching the locals make cheese and visiting a mountain observatory based in a castle.

In the streets, hang the black and red flags of the Ukrainian Independence Army (Stepan Bandera), ATMs ask if you'd like to make a donation to the war effort, and on the way up to the mountains at Kolomyya, we met a lady whose husband had donated a tank to the Ukrainian war effort. But all calm. This area feels more like any Alpine region, the Swiss Alps, the French Alps - pre-development of course!

Carpathian Cottage in the Hills.jpg