"Run along and set all you have on the table for us. We don't want honey buns and poppy cakes; bring us a sheep! And plenty of vodka, not vodka with all sorts of fancies, but pure foaming vodka, that hisses and bubbles like mad." Tales of Nikolai Gogol 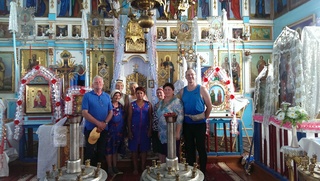 And so while the conflict rages in the East over a thousand kilometers from here, the locals of Western Ukraine are determined to maintain their passion for life. It is a land that Nikolai Gogol would recognise, but in contrast to his quote in the title, there is no need to ask for anything. Locals are intent on feeding us with hearty meaty dishes and providing us with potent distillations to "fortify the mind, avoid the summer colds and enjoy a vigorous life for many years to come".

While riding through a village on the way to Kremenets, we stopped to chat to a group of ladies busily painting their local church for a forthcoming religious festival. Surrounded by fields of sweetcorn, oats and wheat, these ladies were determined that their 250-year old church would be looking good for next month's festival. They were keen to know who we we are, why we are travelling through their region and whether between Robert, Slava, Andriy and I, there were any bachelors who could be tempted to stay in the village to make up the numbers.

More so than anywhere else on the journey so far, there is a real sense of a community, striving to survive, and not just survive, but to rejoice that they are alive, that the sky is blue and full of storks, and that the trees are full of plums, apricots, juicy pears and apples.

This is also the land of Stepan Bandera, the leader of the Ukrainian Free Army, whose partisans continued to fight the Soviets from within Ukriane into the late 1950s when Stepan Bandera was killed in Munich by the KGB. The strong spirit of independence that lives on is typified by the statue of Lenin at Dubna Castle. Covered from top to bottom in creepers, it is completely unrecognisable as Lenin, but sends out a strong signal.

As we ride along, locals engage us in conversation, to give their children a ride on the horses, to ask about life in the West, which they seem to think is just rich perfection in itself, with peace, wealth, big salaries and pensions and no problems. We are heading due South and the locals are distinctly more cheery here than at the boggy Belarussian border.

While official incomes are often less than US$200 per month, all the locals are well-dressed and well-fed. Two pigs and two calves are considered to provide more than enough meat per family per year and the very abundant land means than many people in the villages feed themselves in this way, not to mention the hens scratching around in large vegetable plots full of potatoes, tomatoes and courgettes, trees heavy with fruit and Ukrainian eau de vie (Samagon). Houses are large and while, yes, you do see ancient ladas wheezing along cheek by jowl with horses and carts through the dusty country lanes, there are plenty of smart German cars rushing by too.

Last night as we camped by a lake in the village of Ikva, we were joined by Father Nikolai, a local priest who we'd chatted to during the day. Copper-coloured, well-nourished and shaped like a Samovar in a cloak, Father Nikolai was shaped much like a Samovar. As Dana the horse had thrown one of her shoes, Nikolai was keen to help us to find a local blacksmith. He also owned a construction business and one of his contacts was able to come up trumps with a blacksmith. Although there are horses in every field we cross, finding a blacksmith here is easier said than done because most of the horses here are not shod.

After we'd given Father Nikolai a ride on Lubert (Robert's horse who still has all his shoes), from the boot of his BMW jeep, Father Nikolai produced a roast chicken, a jar of delicious goose pate and .... a bottle of vodka! As we toasted to peace, the world, friendship and to all beautiful Ukrainian women, Father Nikolai entertained us with a plethora of songs in his deep ecclesiastical base. Above us, the night sky showed off thousands of shining stars making me wish I hadn't dispensed with my rather heavy atlas of the night sky earlier in the trip.

In the morning, as were were packing up the camp in the already dry heat, Father Nikolai returned with his son, (training to be a priest and to take over the family construction business) and ice-creams. After another ride on Lubert for Father Nikolai and his son, Father Nikolai left us with a fanfare from his incessantly buzzing mobile phone and a cloud of dusk behind the jeep.

We continued our journey to Kremenets, known locally as "Switzerland" due its green wooden hills (the rest of the surroundings are as flat as a pancake). On the top of one of the hills is a castle, which was used as a base to fight off invading Mongols in the 13th century.

The castle was owned in the 16th century by Queen Bona Sforza, the Italian wife of the Polish King Sigismund I. Known locally as the "evil witch", Queen Bona is reported to have stopped at nothing in her quest to remain eternally young and is blamed for the disappearance of many hundreds of young girls from local villages. Queen Bona who died horribly after a glass of poisoned wine from a trusted servant is said to emerge from a well beneath the castle each Easter, making me feel relieved that we'd decided on a summer visit, rather than plumping for Easter.

Kremenets is home to a monumental Jesuit college, which is now part of the Ukrainian Orthodox patriarchate. Built in the 18th century, the college houses a vast church, which was full of women arranging flowers for the forthcoming services. Other than the collection box for the war effort, this gathering was very similar to those in Britain, with plenty of gossip being exchanged as Gladioli and Sweet Williams were arranged this way and that over cups of sweet black tea. Congregations are reportedly growing and the cheery ladies wished us on our way with presents of ICONs and promises of prayers to keep us safe on the journey.