A night at a country dacha 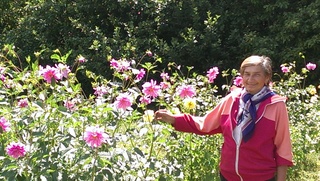 As we rode nearer to Pinsk (the capital of the Polesiye region), the boggy countryside gave way to fields, drainage canals, and an enormous reservoir at "Veluta": legacies of the grand work plans of the Soviet period.

We passed large herds of Friesan cows, some of which tried to charge us in a very ungainly way with their full udders swinning back and forth, tipping them off balance. Sunburnt shepherds on horseback admired our horses and were keen to engage us in conversation, although they didn't have much to say when we stopped. During their long days in the field with nothing but cigarettes, bread and sausage, they just seemed keen to have someone around.

Although during the past few days summer seemed to have "set", today the humidity rose and we were soon trotting along in heavy warm rain. We'd heard about an "AgroEko Usadba"* nearby, and as we were getting soaked through to the skin, we decided to forego our tents for the night and investigate the Usadba.

Olga Grigorievna, the chatelaine of the Usada, which was actually a busky country dacha (cottage), was a sprightly, nut-brown widow, who was supplementing her US$ 200 pension by running a country bed & breakfast. The dacha in which were were to stay was warm, dry and painted inside and out in mustard yellow, reds, greens and browns. Unpeterbed by the rain, Olga heated up the stove in her summer dacha and we loaded in our saddles, boots and clothes to dry for the night, hoping Olga would not notice (or mind) the strong musk of wet horse that enveloped us and our belongings.

As in most villages houses in Belarus, there was no running water, but within about an hour, we were washed in warm water and dressed in dry clothes and sitting down to steaming bowls of Olga's thick mushroom soup, served with thick rye bread, followed by sweet red plums from the garden and glasses of Olga's homemade red wine that was at once sour and sweet and was not unlike Port.

Olga Grigorievna, like most women of her age in Belarus, was a widow. During her working life, Olga has been the assistant of the chief forester of the Veluta region. Olga was a great example of ruddy good health (very much in contrast to many of the bent old lumps that one sees hobbling with stick around Belarussian country villages).

Olga's cottages, barns, and gardens and vegetable patches were carved out of the fields and woods, and as we walked to the reservoir, Olga stopped from time to time to taste the leaves and berries of various plants and described their medicinal properties, showing me the inky depths where she had caught pike, pointing out the ruined home of the former Polish landowners, and noting where she had saved a deer from hunters.

Olga's garden and vegetable patch was a classic Russian/Belarussian mixture of raspberries, apples, apricots, dahlias, dill, cornflowers, tomatoes and the ubiquitous potatoes. The barns were full of oak branches, tied together and drying for Olga to sell to people on the way to the banya, which people in this part of the world use to beat eachother to improve circulation. We managed to keep these away from the ever hungry horses!

The surrounding woods provided Olga with berries and mushrooms. Olga's home, like every single other home in the countryside, was protected by her trusty dogs, kennelled outside in all weathers.

Rising the following morning with something of a headache, which I attributed to ample tastings of Olga's homemade wine (to stave off the risk of a summer cold), breakfast was steaming bowls of homegrown potatoes cooked with onions, mushrooms and bacon, amply sprinkled with dill, and followed by hot tea.

Overnight, Olga's stove had done its magic and our clothes, saddles, boots were now so dry they could stand up all on their own. The horses were happy too, having spent the night in a cosy haybarn. So, we all set off to Pinsk, the final town for us in Belarus with a spring in our steps.