The road to Polesiye, the land of bogs and fogs 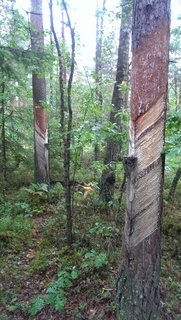 "Englishman like (sic) to ride horssssz!?" asked Nadia with an twinkling smile and a tone that made this seem like half question, half command! I almost expected her to add "Mr Bond" to the end of the sentence. This was not to the time, I decided, to explain the difference between England and Wales.

Nadia had the twinkling eyes of a Bond girl, and had learned her very clipped English on safari in Rajastan. She trotted past on her black and white Bashkirian mare and spent the next hour bobbing up and down in the saddle before me while I tried to catch snatches of the conversation that she spoke with a smile and a laugh, mostly into the breeze ahead of her.

We had guests, and the combination of new horses (stallions and mares), made for fast riding and a frequent rejigging of the order on the tracks through the forests and fields. The trees in the forests around were carved with diagonal scores that allowed the sap to collect in little green containers. Blueberries, cranberries and bog berries grew all around.

One of the challenges for the day was to find the only part of the river shallow enough for us to cross. We did this by leaving the horses in the shade and swimming up and down the river, finding sometimes that the shallows abruptly dropped into deep fast flowing water. Eventually, we found an underwater road, which was just up to the bottom of the saddles. This would be our crossing.

After investigating the river, we had a light lunch in the shade, finishing off some Ostrich biltong, which brought an end to the camping treats kindly donated by friends in Moscow. At this point, "Forsage", the horse of Igor, who had also joined us from Minsk for a few days, bolted off at a gallop having been apparently scared by a grass snake. "Forsage" was found and calmed down, and we set off south towards Polesiya, famous for its bogs and bogs and country

Riding in boggy areas is tough for the horses, as you need to stick closely to the track or risk losing your horse and yourself to the sucking black sulphurous muds. It is also tough because of the biting insects that tend to live in these damp places. Half the time, you expect the earth to open up before you and an army of Orcs to come running forth, or worse...

From time to time, our route would take us along beautifully old cobbled roads that were now in the middle of nowhere, but that testify to a prosperous time of merchants and trade. Most of the villages are now emptying as the young leave for the cities and the old look after their animals and survive on a largely subsistence basis, seemingly resigned to the fact that once they have gone, their much loved huts and well-tended gardens will join the rambling wrecks that surround them.

Another full moon, friendly villagers passing by (attracted by the horses), bringing fresh milk, eggs, and in the wide-vowelled and very melodic country brogue of Polesiye, wanting to know all about the journey, how much you earn, how old you are, how many children you have and to join us for a drink and some home-cured bacon (salo) around the campfire. As we move on the following morning, they come to wish us well, smiling and saying "Shastlivinki" (Have a safe journey)!